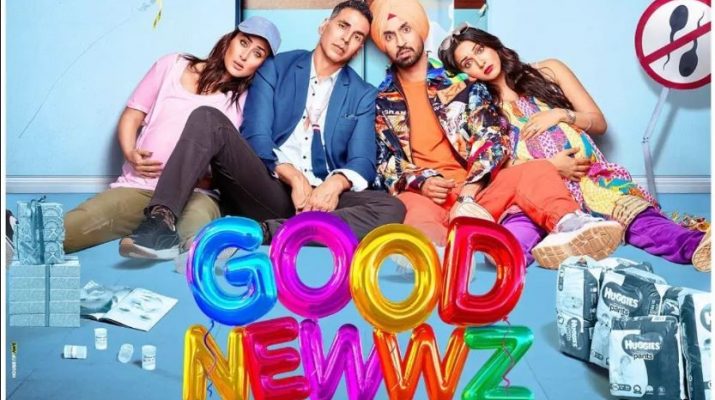 PLOT: When a couple is trying to have a baby, are unable to conceive naturally, they decide to go for an IVF (in-vitro fertilization) procedure. But a sperm mix up by their doctor leads to much confusion.

MOVIE REVIEW: Good Newwz is a smartly made comedy film that has an interesting and engaging plot too. The movie revolves around two couples — the Batras, the first pair of Varun and Deepti are from an upbeat Mumbai society and the second pair of Honey and Monika are based in Chandigarh. A mix-up of sperms during the In Vitro Fertilisation (IVF) process results in Honey’s sperm getting implanted in Deepti’s womb and Varun’s in Monika.

Debutant director Raj Mehta successfully delivers comedy of errors & a rib-tickling entertainer film. He manages the story extremely well ensuring comedy with well-connected emotional scenes. Writers Raj Mehta, Jyoti Kapoor, and Rishabh Sharma give us a sparkling light-hearted comedy with lots of wow moments for the audience. They pens some funny dialogue which goes well with the narrative and written hilarious witty lines for the lead characters.

There is a seamless humour in the first half of the film and hardly any dull moment. A couple that is conflicted about parenthood is shown in a terrific way. Post interval the movie keeps you hooked with its humour, drama, and emotions. The second half focussed on the aftermath of the sperm mix-up that occurs during IVF. The switch from comedy to drama in the final half-hour of the film slides in very smoothly.

Good Newwz is filled with top-notch performances. Akshay Kumar never ever disappoints his fans with his impeccable comic timing. His performance shines in the emotional scenes as well. It’s a delight to watch stunning Kareena Kapoor Khan after a Veere Di Wedding (2018). Kareena got the well-written role of a confident, independent and working woman. She has done complete justice to her character and her chemistry with Akshay is one of the highlights of the film.
Diljit Dosanjh has his comic timing on point and takes the film to another level with his impressive innocent jokes. The actor excels in his characterisation of Honey tremendously well. Kiara Advani is a surprise package and delivers a decent performance. Adil Hussain and Tisca Chopra did their supporting parts well.

Vishnu Rao’s cinematography goes well with the theme of the film. Manish More’s editing is good. Music is another plus point for the film. Sauda Khara Khara and Chandigarh Mein are already chartbuster foot-tapping numbers. Maana Dil and Dil Na Jaaneya and Laal Ghaghra are average.